Most of us may hope never to be in prison, but as long as we tolerate prisons that cage human beings under conditions that would be illegal for animals in a zoo, we lend our acquiescence to the idea that it is permissible to treat human beings inhumanely. If we tolerate discrimination against women, or racial minorities, or the handicapped, we give our consent to injustice. If we accept that anyone may be denied their rights, their freedom, then we undermine our own rights and freedoms even as we undermine social solidarity.
Human Rights & Civil Liberties Overview

Corporations have increasingly become legally unaccountable for their behaviour. All too often corporations break the law and engage in criminal acts which would be severely punished if they were committed by ordinary individuals. These illegal acts range from deliberate health and safety violations that cost lives, to land seizures, to environmental negligence that contaminates lands and waters. Most of these illegal acts are never prosecuted, and those that are, are usually dealt with by a fine that corporations can treat as a cost of doing business.
Corporate Crime

On December 11, 1962 the last execution in Canada took place here in the middle of our neighbourhood*, at the Don Jail, when the murderers Lucas and Turpin were hanged back to back.

Ten years before that, in December 1952, the Don was the site of another double hanging when Jackson and Suchan went to the gallows at midnight while outside, waiting for news of the murderers' death, a drunken crowd milled about, celebrating and providing living proof of the uplifting effect which the death penalty has on society. 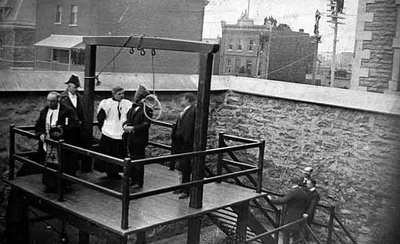 The deliberate legally sanctioned taking of a human life is a potent emotional totem, an act through which we participate symbolically in the forbidden act of killing. No wonder then that the "debate" over capital punishment is so emotional, so categorical, so barren of analysis of whether the death penalty actually makes practical sense.

The latest round of demands for the restoration of hanging illustrates vividly the blind emotionality the subject arouses. The demands are spurred by the recent killings of several policemen; supposedly the death penalty would be an answer.

Yet look at the nature of these killings. A teenager with no record of crime or violence rams a police car broadside without warning, killing the officer, and then shoots himself dead. A young man tells his girlfriend that he is going to shoot someone, goes out and machine-guns the first handy policeman, then turns the gun on himself. A man lures a police officer to his home on a pretext, kills him, and then kills himself. A man who has sworn to his friends that he will never allow himself to be taken alive guns down a civilian and a policeman before being killed in a shootout in which an other policeman also dies.

How can capital punishment be used to punish those who are already dead? How can it deter someone who is out to die? What possible relevance does the death penalty have to any of these tragedies?

In short, none. They are merely an emotional trigger for those who have come to believe that the abolition of the death penalty represents part of a slide to social chaos which could be reversed if only the noose were brought back. There have been many studies of the relationship between capital punishment and the incidence of murder. The universal conclusion has been that there is no relationship.

In the United States, it was found that states without capital punishment had slightly lower murder rates than those with it. In Canada, despite the recent incidents of police murders, killings of policemen have in no way increased since the death penalty for killing police officers was abolished.

In fact, the most policemen ever killed in Canada in one year -- 11 -- died in 1962, when the death penalty was last carried out. The following year, with the noose put away, not a single policeman was killed. Hardly an indication that Canada is full of potential police killers held in check by the death penalty alone.

A prison sentence is not only an effective deterrent, but it also offers an important advantage over capital punishment: it is possible to make amends for a mistake. We have had in Canada three well-publicized cases recently of prisoners serving lengthy jail sentences for crimes they did not commit.

What restitution would it be possible to make to Donald Marshall, for example, if he had been hanged for the murder to which another man confessed after Marshall had served 11 years in prison?

The death penalty, emotional beliefs not-withstanding, is not a deterrent. In country after country, it has been found that the existence, abolition, or re-introduction of capital punishment has no discernible effect on the murder rate.

What does have a discernible effect, on the murder rate, on other crimes of violence, and on the crime rate in general, are various social factors. Every percentage rise in unemployment, for example, is accompanied by a corresponding rise in mental illness, suicide, and crimes such as wife beating, child abuse, robbery - and murder. This is not to say that being unemployed or poor directly causes people to become criminals - most unemployed people are no more likely to commit a crime than their employed counterparts. But it is to say that being unemployed with little hope of getting a job puts a serious strain on people. If they are young, male, and given to hanging around - what else is there to do? - that strain may well be compounded by regular harassment from police, who at times seem determined to turn such youths into police haters.

Most cope with the strains of poverty and unemployment in ways that do not bring them to the attention of the police. But inevitably some do not. And inevitably, as the number of the poor and the unemployed increases, so does the prison population. Society can't afford the small amounts required to help people become decently self-sustaining, but can afford to spend the far greater amounts required to keep people in jail. Canada stands out among Western countries for keeping more of its population in jail despite a lower crime rate.

Those who wind up in prison for a period of time are given plenty of encouragement in their choice of a criminal path by prison conditions which are designed to humiliate and frustrate rather than rehabilitate. Even so, there are those who demand that prisons be even harsher than they presently are. Their conviction is that penitentiaries aren't bleak enough, aren't brutal enough, don't do enough to degrade inmates. They prescribe jails that would be even more efficient in producing hardened and bitter criminals.

The rest of us, unless we are prepared to execute or imprison for life everyone ever convicted of any offense, may question the wisdom of this course of action.

Who do we want to eventually release back onto our streets? A man who during his time in prison was treated fairly and humanely and given a chance to make a new beginning? Or a man who comes out bitter and angry, wanting to get revenge for the way he was treated, convinced by his experience in jail that all of society, including the state which put him away, operates on the basis of brutality, vengeance, and hypocrisy?

As any parent knows, we teach much more by what we do than by what we say. No matter how piously we justify brutal prison conditions or capital punishment, the message we give is a simple one: violence and force are a normal and legitimate way of dealing with problems. Violence solves problems. Even the state, with all its power and resources, chooses to use violence to keep people in line.

We may be sure that inevitably this is the message that will get across. In the United States a study has even found that the publicity given to the crimes of people about to be executed has actually brought forth imitators who commit similar crimes.

The crimes of some murderers especially are almost beyond comprehension. It is hard to believe that a human being could sink to the level they have. But at least the rest of us can put them aside as sick aberrations. They are so far removed from us that some of the horror is taken away.

What is more horrifying, in a sense is the picture of a society cold-bloodedly organizing itself to kill. Deciding that killing people is a way to solve problems, and setting up a machinery to do so. Paying jurors and judges, carpenters and electricians, doctors and priests, and hangmen, all to take part in a planned and deliberate taking of human life. Paying them for their participation. All in a day's work. This kind of cold blooded killing is the most horrifying of all. Especially when alternatives are available, and we refuse to take them.

* "Our neighbourhood" refers to the area of Toronto east of the downtown where the Don Jail is located. 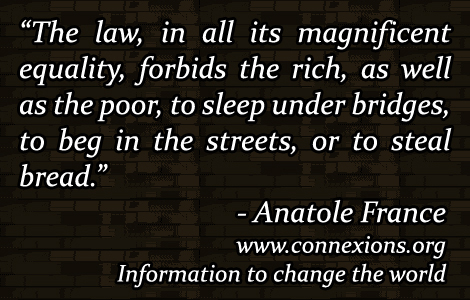