Connexions – the project I work on, which encompasses both a physical archive and an office, as well as the Connexions.org website – shut down in March 2020 because of the pandemic, and clearly we’re still some way from being able to re-open. I wander over to visit the archive space every week or two, just to make sure everything is still OK and run my fingers lovingly over the materials on the shelves, but of course there is no one else there.

And that’s a problem for me, because I’ve always depended on deadlines to motivate me. In high school and university, I mostly wrote my essays the night before they were due. That usually worked out pretty well, so I had no reason to change my ways. After that, I moved into journalism, where the typical pattern is that an editor gives you an assignment in the morning, and you have to hand it in, finished, by the end of the afternoon. That also worked well for me.

Eventually I became the editor of a community newspaper (Seven News), where the bi-weekly publication date imposed a non-negotiable deadline. Those were the days when newspapers were laid out on blue-lined layout sheets, each article and ad a separate sheet which was cut to the required dimensions, waxed on the back with a hand waxer, and then positioned on the layout sheet. The artwork had to be at the printer at 8:00 am on Friday morning; typically we would finish the layout around 4:00 am and then drive the artwork over to the printer to drop into their extra-large mail slot so it would be there when they arrived.

I got a rush from hopping in the car at 4:00 am and zooming through the empty streets over to the printer. I can’t imagine that finishing the job 24 or even 48 hours early would provide a similar rush.

After my years at Seven News, I continued to work in publishing, and therefore always had hard deadlines to motivate me. Of course, as an editor and publisher, I knew that many writers were like me, and I acquired an essential skill: lying to writers about when the deadline is. NEVER tell a writer what the real deadline is: I think that is an iron-clad rule.

But now, here I am: I am both the writer and the person imposing the deadline. One can and does lie to oneself about all sorts of things, of course, but you really can’t lie to yourself about a deadline or lack of one. Sure, I can write dates on a calendar, but there are no consequences if I fail to meet the self-imposed deadline. There is no one to be angry or disappointed.

What’s worse is that the projects I’m working on now are large book-length projects which don’t lend themselves to short-term deadlines. So even when I make good progress, nothing gets completed. Earlier in the week, I sat down and wrote 15,000 words over three days. It felt satisfying, in a way, but there isn’t the satisfaction that comes from actually finishing something.

These days, I find myself drifting from one project to another, never quite finishing any of them, and always feeling that there is something else I should be doing instead. On very rare occasions, that something else is even housework, but that is rare. I saw a fridge magnet once which said “No one ever said on their deathbed 'I wish I had spent more time doing housework,'” and I have adopted that piece of wisdom as a guide to life. In the past, deadlines were useful for getting housework done, because when you’re planning to have people over, you clean the house. So all those brunches and dinners provided highly useful deadlines. Now, visitors only visit outdoors, and all I have to do is sweep up the leaves and blossoms.

The other thing that is useful for avoiding deadlines is digressions, and I’m really good at that. This rumination on deadlines is a digression from what I’m really supposed to be doing, which is writing an article that is supposed to be finished by tonight. It will appear on my diemer.ca website, which is called Radical Digressions, tomorrow. If I manage to get it done by the deadline. 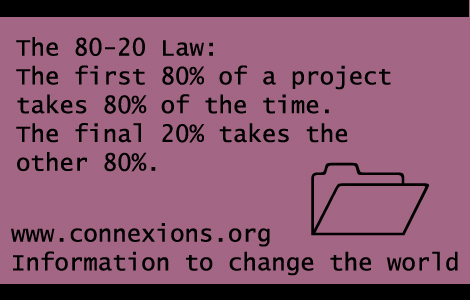