The free market doesn’t ‘deliver the goods’ for most of the world’s people. It delivers a lot of goods for a few, a fairly decent standard of living for a larger number, and much, much less for the majority. The free market isn’t just the stockbrokers on Bay Street making several hundred thousand year, it’s also the cleaners in those same buildings making $7 an hour.
Interview

We have to make an issue of the fact that what currently passes for democracy is a best a two-dimensional shadow of what a democratic society ought to be. In contrast to the parliamentary obsession of the social democrats, we should be offering the model of a radically democratic society, in which power is taken away from corporations, governments, bureaucracies, and experts, and dispersed widely.
Let’s Stop Kidding Ourselves About the NDP

"Free Trade:"
Look at the Contents, Not Just the Label

I read with interest the responses in Green Revolution (Vol. 46, #3) to my article "Building a Social Movement: A Canadian Perspective". I would like to offer some further comments.

My first reaction has to do with the patronizing tone adopted by some of my critics. I don't mind people disagreeing with me, but I do mind being portrayed as a well-intentioned "follower" who is attracted by the "rising star" of the Green agenda but isn't quite able to "understand it", someone who needs to be "weaned" from his provincial prejudices, which are apparently rooted in the "almost pathological fear" of U.S. domination we Canadians have.

If Dan Sullivan is sincere in hoping that people like me will come to support the Green alternative "to the extent that they understand it", he would do better to adopt a less patronizing and superior tone.

My second reaction concerns the strongly ideological nature of the critiques. By ideological, I mean that the responses seem to me to be more of a reflex reaction triggered by certain 'code words', than they appear to be a genuine attempt to understand and respond to the substance of what I actually said.

For example, both Dan Sullivan and Hanno Beck take me to task, at length, for allegedly advocating "protectionism". If they, or anyone else, take the trouble to go back and read my article, they will search in vain for any statement advocating "protectionism". There isn't one. They have quite simply imagined it, because they expected it to be there. This is an example of ideological thinking blinding people to what is really being said, to the extent that they actually falsify someone else's views.

What has triggered their reactions is the fact that I am opposed to the Canada-U.S. Free Trade Agreement, which came into effect on January 1, 1989. For them, "Free Trade" is an ideological code word. "Free Trade" is automatically good, so anyone opposed to "Free Trade" must inevitably be "inherently centralist, nationalistic, monopolistic, authoritarian, and bureaucratic", in favour of keeping "domestic monopolies fat and happy."

This is fine polemic, but it is a little inadequate as analysis.

For example, it doesn't do a whole lot to explain what actually happened in Canada when the Free Trade Agreement was being pushed forward (by a right-wing corporate-dominated government headed by a vocal admirer of Margaret Thatcher and Ronald Reagan.) During the nation-wide debate, virtually every corporation in the country came out in favour of the Free Trade Agreement. The corporate sector intervened in the 1988 election campaign in a way that was unprecedented in Canadian history, with some 60 million dollars being spent to promote the deal. (This would be equivalent to spending $600 million in a U.S. election campaign.)

At the same time, progressive groups, including the environmental movement, women's groups, Native peoples, the peace movement, trade unions, leftists, and many others, came out virtually unanimously against the deal. (They succeeded in getting 57% of Canadians to vote against it, but thanks to the Canadian electoral system, the government was returned with a majority of seats even though it got only 43% of the vote.)

Isn't there something wrong here? If free trade is so good for ordinary people and so bad for corporate monopolies, why were the corporate monopolies almost unanimously in favour of free trade? Are Canadian monopolists so mind-bogglingly dumb that they would rush to spend tens of millions of dollars to promote a deal that is bad for them? Don't they like being kept "fat and happy"?

If free trade is a logical part of green economics, why did every environmental group, and pretty well every other grassroots group in the country, oppose it? Are we all just really dumb up here?

Or could it be that Canadians tend to be a lot better informed about the Canada-U.S. Free Trade Agreement than most Americans, including my critics in Green Revolution? Do any of the people who criticized my opposition to the Agreement have a clue as to what it actually says? I very much doubt it!

This may be the place to voice a complaint that is felt by almost every Canadian, and indeed probably every foreign, activist who deals with American activists. It is this: Americans, including sadly enough Americans who are devoted to working for change and who are very nice, decent people, are often pitifully ill-informed about the rest of the world, including Canada. Yet this doesn't stop you from feeling entitled to lecture us about how to run our affairs. Can't you see how insulting it is to be told by someone who has "just spent most of a week"(!!) in Canada, and who clearly doesn't know one single word of the contents of the Canada-U.S. Free Trade Agreement, that it would be great for us, and that we reject it not for any well thought-out reasons, but because of our "almost pathological fear"?

The fact is: we in Canada oppose the Free Trade Agreement not because we are against all trade, nor, as Hanno Beck thinks, because we support the "anti-freedom side." We don't oppose it because we have a "pathological" predisposition, as Jubal Stucki alleges, to "imagine a whole litany of negative symptoms."

We oppose it because, unlike you, we know what the agreement actually says, because we have begun to witness its effects (the first year of the deal was Canada's worst year in trade in 15 years, and tens of thousands of workers have already lost their jobs), because we have discussed and analyzed it exhaustively, and because we believe that this deal is a bad deal for Canada and most Canadians, although it will certainly help to make our corporate monopolies 'fatter and happier'.

I fear that the people who responded to me in Green Revolution are being influenced more by the nice sound of the phrase "free trade", and by whatever reflex that phrase triggers in them, than by their knowledge or analysis of the actual Free Trade Agreement.

If they wish to contribute to a worthwhile discussion, they would do a lot better to learn something about the facts first. They should know that you have to look at the contents, not just at the word "free" on the label. Here in Canada, we did look at this so-called "Free Trade" deal and found that it wasn't much of a deal, and it certainly wasn't free.

The reason it isn't free is because it will cost Canadians a lot, especially in the realm of social services. Dan Sullivan argues that social spending is a dead end, and that we ought instead to have communities "where people are not routinely destroyed and where neighbours look after one another". This is a vision I can certainly agree with - as a goal. But the fact is that we don't have such a society, and we won't have for a long while yet, and as long as we don't, many kinds of social spending are essential, in my opinion.

For example, in Canada we have a tax-supported universal medicare system. It means that everyone, regardless of income, is entitled to free medical care. Those of us on the left have criticisms of some aspects of the medicare system, which certainly has its failings. (It is worth mentioning, though, that Canada spends substantially less, per capita, on health care than the U.S., but ranks higher in most indicators of health, such as infant mortality and life expectancy.)

But while you will find people arguing that medicare should be improved, you'd have to search hard to find Canadians who would want to scrap it and adopt the American "free market" approach, which leaves millions of people unable to afford proper health care.

Yet one of the dangers of the Free Trade Agreement is that it will undermine Canada's medicare system, because U.S. politicians maintain that it constitutes a "subsidy" which interferes with a "free market." Similar attacks are being launched on other Canadian programs, such as unemployment insurance, workplace health legislation, and environmental laws.

It was in relation to this point that I was most dismayed by Dan Sullivan and Jubal Stucki. Dan Sullivan complains about unions and the "idle poor", while Jubal Stucki says he "would have a problem finding any benefits from the welfare state", claiming that "the more free, trade and markets can become, the more just our society will be."

This is supposed to be "the green alternative"? This is "a new way of thinking"? If there is something that distinguishes these opinions from traditional right-wing free-enterprise Republicanism, it eludes me.

I agree that in an ideal society, we would have something radically different from our current social welfare systems. But to argue that in this society, social welfare has no benefits, is tantamount to advocating that the people who depend on it to survive be turned out into the streets to live or die as fate decides.

Is there really not "any benefit" to free medical care for sick people who otherwise wouldn't have any? Is there not "any benefit" to giving single mothers enough money to buy food for themselves and their children? Should we simply write off those who are sick, or poor, or too old or too young to survive without help? Should we cut these "idle poor" off the welfare system in which Jubal Stucki cannot perceive any benefit?

I hope that the readers of Green Revolution do not agree with this version of "Green thinking."

Perhaps I am being unfair. Perhaps these writers don't really mean what they appear to be saying. Let me reiterate my own position: While I have nothing against trade or markets, I believe above all in a democratic society, a society in which institutions and activities, including the economy, are democratically accountable to communities and to society as a whole and to its environmental, economic, and social needs.

I do not accept the idea that there should be no restrictions on trade or the market. If a particular economic activity is environmentally or socially harmful, why shouldn't we restrict it? If the so-called "free market" (i.e. an economic system where nothing is allowed to interfere with the freedom to make profits) results in economic activity that destroys the environment, or dumps people on the streets, then why shouldn't society be able to intervene?

I don't know what the people who criticized my article think about this. I would like to hear from them, and from other readers of Green Revolution: Do you really believe that "free trade" and the "free market" are so sacred that nothing should be allowed to interfere with them, or do you agree that trade and other economic activity should be subject to intervention under some circumstances, and if so, when, how, and by whom?

I look forward to continuing the discussion. 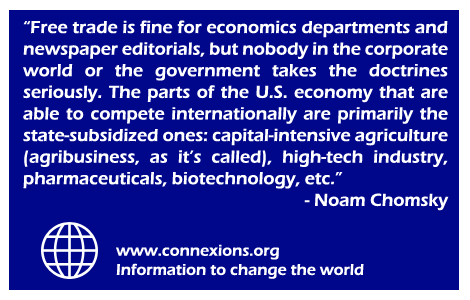