Northcote Parkinson, in Parkinson's Law, gave us a biting guide to the internal workings of bureaucracies. A more modest and less inspired, but handy, companion volume, a guide to fighting bureaucracies, is The Householder's Guide to Community Defence Against Bureaucratic Aggression. 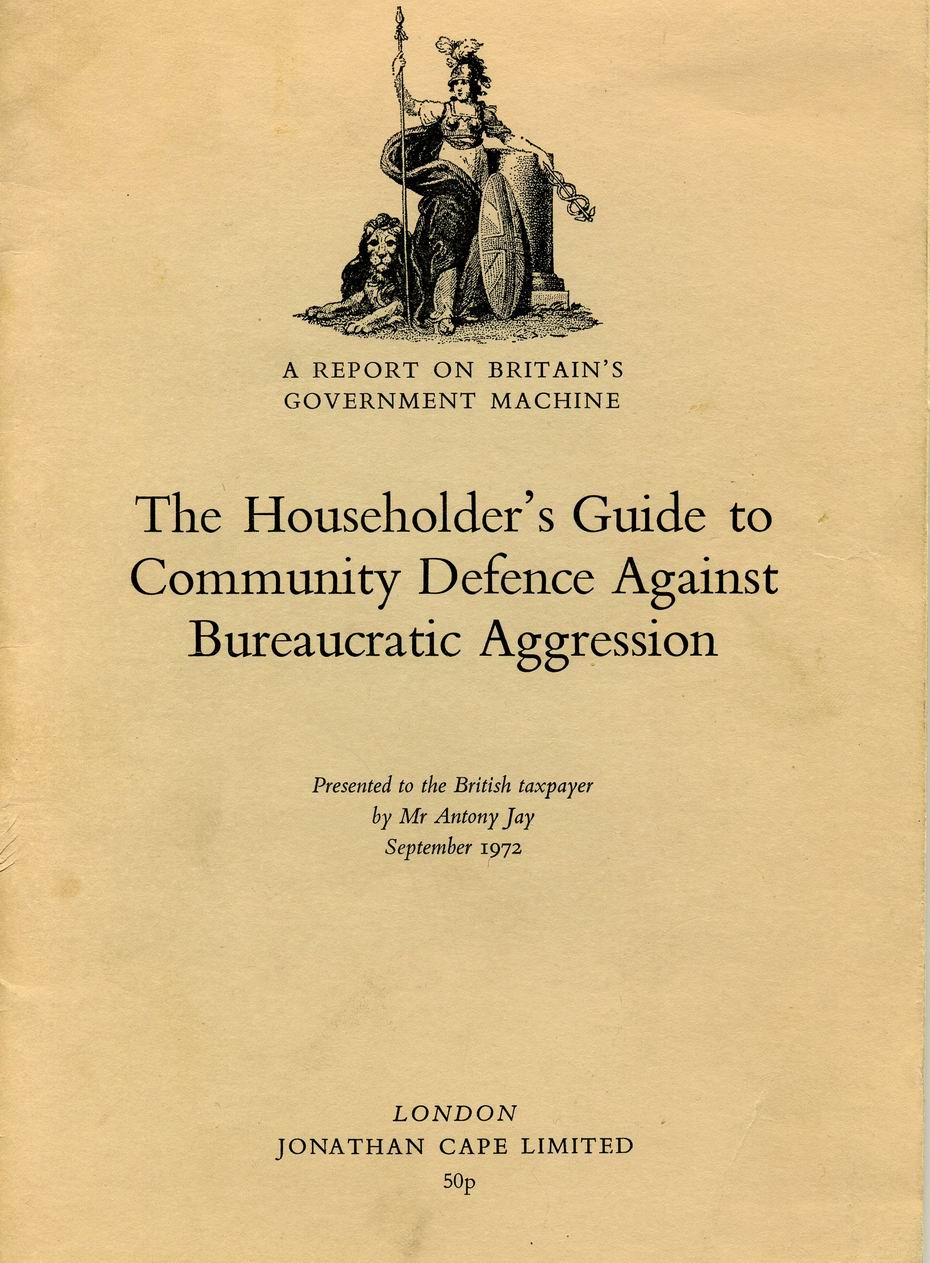 This little (64-page) pamphlet outlines the organizational principles and campaign tactics that communities should use in fighting projects or developments being foisted on them by unresponsive government bodies, whether by elected authorities or by civil servants.

With meticulous attention to detail, and frequent resort to dry British humour, the author, Antony Jay, sketches the way in which a local organization can best draw on its community's resources and support to mobilize funds, publicity and experts on its side, and utilize tactical initiatives in fighting the bureaucratic enemy and exploiting his weakness and divisions.

Heading the structure he has an "Action Committee" which co-ordinates the effort.

He details the various facets of the campaign: attacking the concept of the proposed development itself, as well as the facts and figures used to support it. This is accompanied by the presentation of an alternative plan. He stresses the value of behind-the-scenes diplomacy for gathering facts and achieving settlements, as well as of frontal public attacks.

He points to the necessity of avoiding, wherever possible, situations which back officials or elected representatives into a corner, giving them no face-saving way to back down from the original plan. By focussing on differences among the `enemy' and not provoking irrevocable commitments, he says it is often possible to avoid the monolithic opposition of an aroused administration.

He indicates the most fruitful lines of inquiry to be followed up when attacking the plan:

"Is the plan necessary at all? Will it solve the problem it sets out to solve or aggravate it, or create other, greater problems?"

"Has the plan taken into account at all the most advanced thinking the most recent experience the latest technologies? ... examples from foreign countries have a special glamour as well as probably being unknown to the enemy, and hard for them to verify."

"The criteria. Nearly all these plans list, very early on, certain criteria which any plan must fulfil. Miraculously, it turns out that this plan fulfils all of them. You are meant to think that the planners started from the criteria and eventually arrived at the plan. In fact, of course, it happened the other way around. No good planner begins to formulate criteria until the plan is complete: he then evokes them by listing any plausible ones which the plan can be shown to meet. Your answer is to challenge these criteria."

"Hidden alternatives.`There are two alternatives'; There are three possible approaches' ... a little reflection can usually turn up nine or ten additional alternatives".

"Factual accuracy. Do not expect all the facts to be accurate, and try checking up on any that looks questionable."

"When the massive Breeching plan was published by British Rail a Cheshire schoolboy thought there was something funny about their figures for usage of the line behind his house. So he spent a day counting, and found the line enormously busier than the report said."

"The unmentioned facts. The planners will have suppressed a number of facts which damage their case. How can you find them? The best way is to got to all the sources which they have used for their information. They may not willingly disclose them, but a sharp letter denying the accuracy of all assertions will usually elicit chapter and verse, and you can then get to work on other chapters and other verses for the less convenient facts."

"Selective deduction. Related to the hidden alternative. `The low usage figure shows that there is little public demand...' It may indeed. But it may show that the price is too high. Or that the public does not know about it. Or that it is so inefficiently run that people can't be bothered."

Jay exposes the motivations of the men behind the plan:

"They have been at it for months. It has generated several major internal rows. There have been long negotiated compromises with other departments. The chap who started it all off was promoted half-way through and moved to Edinburgh. The first draft was produced in a tremendous rush because the Minister/Permanent Secretary/Chairman of the Planning Committee didn't give the go-ahead till three months after the deadline date, and some of the flaws did not show up until it was too late to do anything. The policy decision it stems from was taken six years ago, and they are now talking about rethinking the whole policy on a more comprehensive basis, so if it does not go through quickly it may never make it. It has meant a great deal of work and unpleasantness and getting home late for supper, and the thought of going back to square one gives them all nightmares."

"In their internal dissentions lie some of your best hopes: you must do nothing that will make them close ranks"

Jay at his best when proposing tactical manoeuvres. For example, when discussing architects' drawings, he says:

"It will be the usual idealized fairyland picture - one car in the park, two girls in summer dresses, bright sunny day, trees in full leaf, exaggerated perspective, and the building bright and shining in all its glory. You cannot fight pictures with words. You must get an architectus diaboli to do an equally accurate architect's drawing with bare trees under a leaden sky during the rush hour, cars jamming, at the foreground washing hanging out with the paintwork starting to peel and the white stonework staining to grey in patches after a season or two of exposure to smoke and fog."

Or when dealing with a press reluctant to give a campaign event the publicity it needs: "one group of protestors used to get excellent coverage through a member who used to ring the press and television the day before in a hectoring upper-class voice and tell them not to cover this exhibitionist display by a tiny handful of troublemakers, that it would be irresponsible to publicize people who opposed the rightful authority, and that he would make trouble if they sent their cameras and reporters just because the other lot were covering it."

To be sure, The Householders Guide only applies to certain kinds of community organizing. It is a strictly defensive, conservative approach, useful for preserving neighborhoods, but having less value for those seeking to re-structure blighted areas, or those wanting to organize for wider social change.

Published in the Connexions Digest #50.