But the most interesting thing about the trial was the evidence of the police officers who made the arrest. Each was asked by the defence lawyer why he considered the objects seized to be obscene. And each one in turn replied that these were not the kind of things sold by Eaton's or Simpson's.

This, it must be admitted, is a criteria for judging what is obscene and what is not that is as profound as it is simple. It neatly and effectively slices through the impenetrable legal and moral tangle that has surrounded obscenity cases for so many years, and gives us a foolproof standard which, while it may appear to be arbitrary on the surface, actually represents what Hegel might have called the unfolding concept. It contains, in fact, the perfect unity of form and content, as well as the synthesis of quantity and quality.

Consider the root of the word 'obscene.' Literally, it means off scene. Something that is not seen or spoken of. Something taboo. Eatons and Simpson's are the crystallized essence of capitalist social relations (in the case of Eaton's Crystal Palace at Yonge and Dundas in Toronto, this is true literally as well as figuratively.) In this society of the commodity, "there is no vision except the dominant vision, no thought except the dominant thought, and reality except the dominant reality." There is nothing but Eaton's and Simpson's. Thus everything that is not Eaton's or Simpson's is obscene, in both meanings of the word: off scene, non-existent, not allowed to be spoken of, taboo, and indecent, pornographic, lewd, an affront to society's (i.e. Eaton's) moral standards. As always, capitalism's underlying philosophy reduces in the final analysis to the police mind: Sex aids remain obscene until Eaton's decides to sell them. 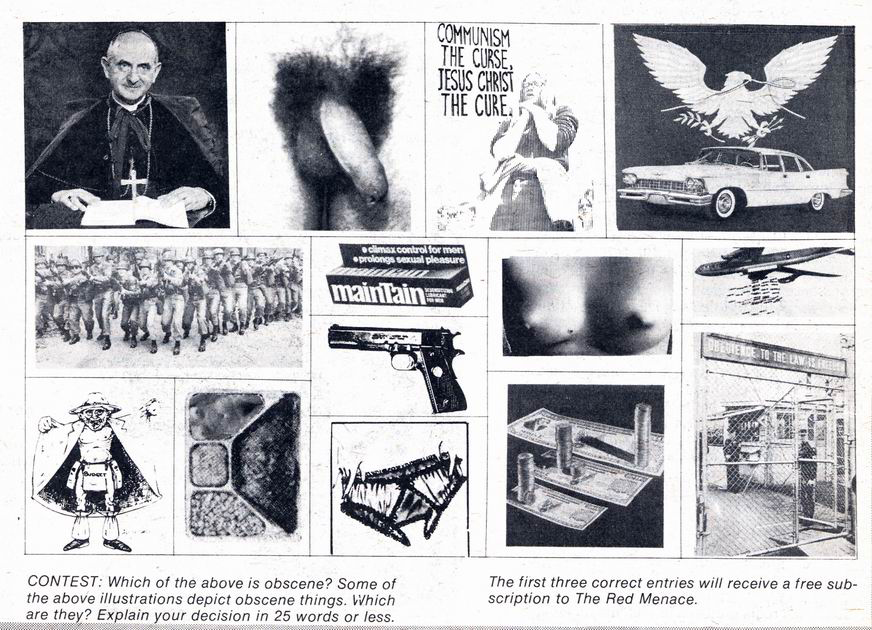 Published in The Red Menace, Spring 1978