We are seeing everywhere the signs of a social breakdown which can be linked to the breakdown of community and shared values. The dominant value system can increasingly be reduced to the idea that the only thing that matters is to get as much for yourself as possible. The real estate speculators and the street criminals both live by this motto, and both contribute their share to making cities less liveable. Governments at all levels make planning and transportation decisions which only worsen the problems.
Community, Urban, Housing Overview

The problem is that good advice about healthy living sometimes ends up as a cover for blaming people for being sick. And that can lead to suggesting that people don’t deserve health care if they made bad choices, like smoking, becoming overweight, or being poor.
Medicare Myths and Realities

Today, communities everywhere are in crisis. Industrial societies have proven themselves to be remarkably efficient destroyers of traditional communities, without, however, being able to offer viable alternatives to replace them.
Community, Urban, Housing Overview

The inefficient socialistic health care system sends him off for treatment within ten minutes – not too shabby, most of us might say – but it takes a lot more than efficiency and high-quality appropriate care to please a National Post columnist.
National Post columnist traumatized by having to wait his turn


Seven News was a community newspaper published in the east-of-downtown area of Toronto in the 1970s and 1980s. I was involved in Seven News from 1975 to 1984, including six years as editor. Seven News has been archived on the Connexions website: find the archive here, and a complete list of all articles published in Seven News here. Some of the articles I wrote for Seven News are listed below. - Ulli Diemer


Local NDP Fights to Keep Waffle Movement in Party - The NDP’s St. David provincial riding association is working to find a way of keeping the Waffle movement in the party, challenging Stephen Lewis’s move to expel the Waffle. (August 26, 1972).

Regent Park Sets up Youth Employment Service - An employment referral service for unemployed teenagers is being set up in the Regent Park area, where the lack of jobs for young people is being felt very severely. (March 6, 1976).

People vs expressways battle is on again - After being beaten back five years ago, the expressway proponents are crawling out of the woodwork with their old plans, with only the tactics and the terminology changed. (June 26, 1976)

Riverdale resident protests bank addition - “Health Before Wealth”. That’s what one of Morris Silber’s picket signs said as he walked back and forth in front of the Bank of Nova Scotia at the corner of Broadview and Gerrard.. (August 7, 1976).

Local schools perpetuate inequality - The more money your parents earn, the better you are likely to do in school. (August 28, 1976).

Survey shows varying prices at drug store - It pays to shop around before you decide with which drug store to do business. This is the conclusion of a survey of Ward 7 drug stores carried out recently by Seven News staff. (August 28, 1976).

Don Vale Centre fights to survive - The Don Vale Community Centre is fighting for its life. On October 21st [1976], the Centre was informed that the United Church, which owns the community centre building at 80 Winchester Street, intends to terminate the lease on the building effective December 31. (November 20, 1976).

Sewell and Howard re-elected; Barr and Holmes for education - Results of the December 1976 municipal elections in Toronto's Ward 7. (December 18, 1976).

Barr to be Board Chairman - Ward Seven school trustee Doug Barr seems certain to become the next chairman of the Toronto School Board. (December 18, 1976).

Sewell, Howard returned; Stamm loses decisively - The difference between the campaigns of John Sewell and Janet Howard, on the one hand, and Garry Stamm, on the other, was apparent as soon as you walked across the street from the one headquarters to the other on election night. (December 18, 1976).

Spring sprung, grass riz, wonder where birdies is - Whether we’re ready to believe it or not, spring is upon us, and if we go out and look for it, we’ll come across signs that establish that fact much more firmly and decisively than the passing moods of the weather. (April 9, 1977).

Workshops airs youth problems - About 100 people came together at an all-day workshop on youth and agency problems in Regent Park. (April 23, 1977).

Wellesley report sharply critical - The Wellesley Hospital has come in for strong criticism in a brief written by a group of local residents, and presented to the hospital May 13 [1977]. The brief documents numerous complaints about the hospital, including Emergency Department staff attitudes, treatment of patients and their relatives and friends, follow-up and aftercare. It charges that although the hospital is a public institution, there is no visible or publicly known means of access to its policy makers, and no accountability to the community it is supposed to serve. (May 21, 1977).

He who pays the piper... - Community groups have become dependent on government money resulting in an erosion of their community base and their independence. (July 2, 1977)

Death on Yonge Street - This city, which usually seems far too cynical and hurried to care very much about anything any more, has been deeply shocked and violently angered by the murder of the little shoe-shine boy, Emmanuel Jaques, on Yonge Street. (August 13, 1977).

This book explains why things don’t work (book review) - There a lots of guides explaining how things work. This one explains how they don’t – and why they don’t. (August 1977)

Make the Don a Museum of Horrors - The true horror of the Don Jail is not the ancient, decrepit, but guiltless building on Gerrard Street, but rather the philosophy it represents. (December 1977)

OHC tenants get mad - Fed up with the attitudes and policies of Ontario Housing, some Regent Park tenants have been meeting since late last fall to try to find ways to pressure OHC to recognize tenants’ rights. (January 14, 1978)

Political doubletalk - Perhaps the most striking thing about most politicians is that they seem completely incapable of giving a straight answer to anything, of talking in ordinary language, of communicating. Language for them isn’t a way of getting ideas across, but of confusing people so they won’t understand what’s really going on. (February 25, 1978)

Dow complains - Dow Chemical writes to 7 News complaining that one of its trademarks has been misused. 7 News editor Ulli Diemer responds. (March 11, 1978)

A Hot Night in Riverdale - It was a hot, hot night last Tuesday in Toronto. But it was hotter yet in the Riverdale Collegiate auditorium, where the heat came not only from the weather but also from upwards of 300 people crammed into the seats, aisles, doorways, and lobby, from the tempers of those people as they gathered to see what they could do about educational cutbacks. (June 3, 1978)

Major confrontation looms over rent controls removal - It appears that the government has every intention of removing the rent controls that have partially kept the lid on potentially massive rent increases over the past three years. Prior to the controls, rents had been skyrocketing, and it seems very likely that they would do so again if controls are removed. (June 3, 1978)

More than one way to strike - Rather than simply walk away from their vehicles, drivers could keep driving, but refuse to collect fares. This puts pressure on the employer without inconveniencing riders. (August 26, 1978)

A few decide where we live - We have to abolish a system whereby a tiny handful with a lot of money can decide how thousands of other people are going to live, how thin their walls are going to be, how much sunshine they’ll be able to get, where their children will play. (September 9, 1978)

Drug strike long and nasty - A strike by 400 workers against a Ward 7 company is entering its ninth week with no end in sight. (September 23, 1978)

Democracy loses out - The people can say what they want, they can vote how they want, but the bureaucrats make the decisions. (November 4, 1978).

Patton campaign tactics come under fire - George Patton’s campaign tactics created a great deal of anger among his opponents in the last few days of the Ward 7 aldermanic race in 1978, but they don’t seem to have done him any good: he got clobbered. (November 18, 1978).

Stop TTC fare increase - Governments apply a double standard. They demand that public transit pay for itself and that health care and education be judged by ‘cost-benefit’ analyses. But they apply no such standard to industrial policy where billions of dollars are shelled out. (February 24, 1979)

Profits: now you see them, now you don’t - A private developer seems to be moving quickly into the non-profit housing field. (October 5, 1979)

Not guilty means not guilty - The gay news magazine, The Body Politic, is organizing a public campaign to make Attorney General Roy McMurtry withdraw an appeal against the magazine's acquittal on obscenity charges. (January 11, 1980)

The Canada Metals Story: A chronology - The ongoing struggle against lead pollution in South Riverdale. (February 1980)

By the people, for the people? - A tiny group of appointed politicians is ignoring the what the people have said they want. (July 11, 1980)

Something has to give - Emotional issues are potent. Left-leaning and reform candidates can be very vulnerable if right-wing groups are able to seize on emotional questions and make them issues during the an election campaign. (November 21, 1980)

STOL lands again - The proposal for a major commercial airport on the Toronto Islands appears to be back on the agenda. (December 1980)

The police vs. the law - In a democracy the police have to obey the law. In a police state, they don’t. (September 1981)

The Bomb won’t go away on its own - Our task is to break out of this closed self-justifying system by depriving governments of the passive populations they need, by refusing to accept the choices we are offered and instead becoming active participants pressuring them to accept our proposals. (June 1982)

Marguerite has come a long way - Literacy student writes her own story. (April 1984)

Teaching adults to read - Becoming literate is an important way for people to gain more control and power over their lives. (April 1984)

150 Years of Dirty Water - Toronto’s water has been polluted pretty much since the city was founded – but that doesn’t mean we should put up with it. (April 1984)

Soil Removal a Possibility - It may be necessary to remove lead-contaminated soil in the South Riverdale area. (May 1984)

Chemicals in Your Water - There is reason to be concerned about the increasing amounts of chemicals in our water. (June 1984)

Politics of Illusion - Elections have become a contest to determine who is the best actor. (August 1984)

The Capital Punishment Debate - The cold-blooded killing of a human being is horrifying. The existence of capital punishment make us all complicit in killing, and degrades us as a society. (Nov. 1984). 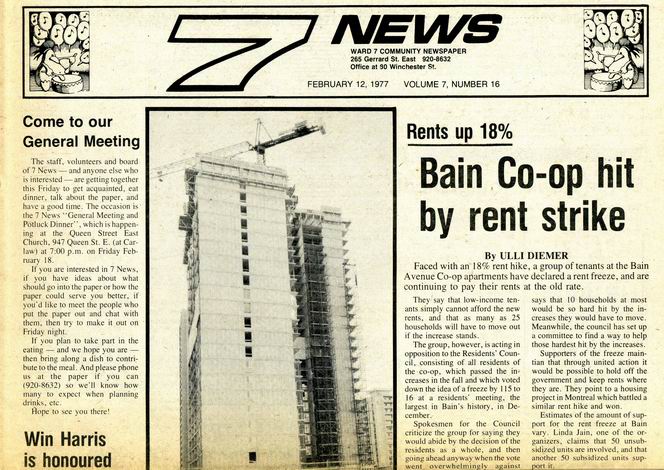