November 11. Remembrance Day. The day the Great War – now called the First World War – finally ended. The date has always been a significant one for me, first of all because it is my birthday, but also because the horrors of the war that ended on that day, and the even greater horrors that followed it, had a huge impact on my family, and therefore on me.

The guns fell silent on November 11, 1918, but reportedly many soldiers in the trenches feared that the armistice would prove to be temporary, and that fighting would shortly resume. In essence, they were right, even if there was a pause of a few years. The way the war was fought, and the way it ended, guaranteed that there would be another one, and that it would be even worse. Some historians argue that the First and Second World Wars were so closely linked that they were really one war, interrupted by a temporary armistice.

The First World War was an enormous crime perpetrated by Europe’s ruling classes: capitalists, landowners, aristocrats, and politicians. They expected, and indeed hoped, that a war would break out sooner or later, and they expected that they would benefit from it. Their visions were of profits, glory, and the conquest of territory and overseas colonies. None of them believed that their side would lose, and the loss of human life meant nothing to them. In addition, as historian Jacques R. Pauwels writes, “war was expected to serve as an antidote to social revolution, causing workers to abandon socialism’s focus on overthrowing the established order via international worker solidarity in favour of nationalism and militarism.” In other words, one of the benefits of war, in the eyes of the ruling classes, was that workers would be slaughtering each other rather than fighting their real enemies.

The fighting ended at 11:00 am on November 11, 1918: the famous eleventh hour of the eleventh day of the eleventh month, mentioned in reverential tones by sombre speakers at countless Remembrance Day ceremonies.

Official remembrances are often about forgetting as much as they are about remembering, and “Remembrance Day” is no exception. Why did the fighting end at 11 am on November 11?

Because it had a suitably solemn ring to it. Because the generals were already visualizing future commenorations when they would bask in glory remembering that historic moment, the eleventh hour of the eleventh day or the eleventh month.

What is never mentioned at the November 11 Remembrance Day observances is that Germany asked for an armistice, and an immediate end to the fighting, on November 8. Marshall Foch, the supreme Allied commander, refused to allow an immediate end to the fighting. He insisted that the killing continue while the details of the armistice were being finalized. The armistice document was finally signed at 5:45 am on November 11. But Foch insisted that its implementation be delayed until 11:00 am. Because 11:00 am on November 11 sounded more portentous, more historically impressive, than 5:45 am.

In the meantime, the fighting went on, even though both sides knew that an armistice was about to take effect. For example, the commander of the Canadian forces near Mons, General Arthur Currie, ordered his troops to attack Mons and take it from the Germans on the morning of November 11, even though he knew that an armistice had been signed and would be coming into effect later that morning, and even though under the terms of the armistice, the Germans would be vacating the town within a day or two. Currie didn’t want to walk into the town after the Germans had left: he wanted to take it from them by force. It was a matter of pride and military glory, he explained later: a final memorable feat of arms for the soldiers under his command.

Altogether, 2,738 men were killed in the last five-and-one-quarter glorious hours of that glorious war, the time between 5:45 am and 11 am. Another 8,206 were wounded, many of them seriously. One is tempted to say that these deaths and injuries were unnecessary, but in truth every death in that war was not only unnecessary, but a crime.

More than 100 years have gone by since then, and we sometimes deceive ourselves that the world has changed. In some ways it has, but not when it comes to the crimes of those in power. Today, as it has every day for the last five years, Saudi Arabia and its allies are attacking and blockading Yemen. The United States provides the support without which the Saudi military machine could not function. Canada participates in the crimes by providing military equipment. The slaughter in Yemen should stop. It could be stopped. But it continues, because there are profits, and military glory, to gain. The crimes continue. 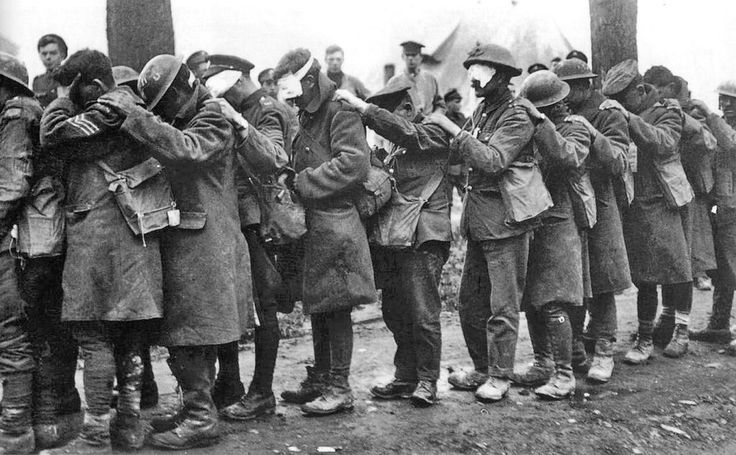 Soldiers blinded by mustard gas in World War I.